No Result
View All Result

Blind brows, rollercoaster dips, vicious off-camber kinks sprinkled in four seasons’ worth of weather and the constant spectre of dawdling traffic spoiling a perfectly hooked-up lap. Patches of slippery shade lurk opposite wooded thickets, where the feeble sun hasn’t penetrated the filthy slush. This morning’s rain drip-drops from branches overhead, greasing the surface long after the shower has ended.

The new Golf R momentarily skates over the frozen splodge before resuming its heat-seeking missile obedience, but we’re closing in on traffic. This could cost us time, but the train of slowcoaches check their mirrors, note the blaze of LEDs coming in hot, and move over. Danke. We’re on for one heck of a sector. The Golf’s taking this gnarly onslaught of nature, terrain and other people’s Hondas in its stride… until the Google Maps lady butts in with an announcement. “Average speed check zone ahead.” And then an even more horrifying sign looms on the horizon. ‘Welcome to Kettering.’ Scheiße.

While the cruise control takes over, I’ll explain. What with international travel currently carrying a life sentence in Azkaban, it’s not practical to take Volkswagen’s latest super-Golf to the most fearsome circuit on Earth. But Top Gear isn’t going to let a pesky global catastrophe bar us from indulging our Nürburgring fantasies. If we can’t make it to die Grüne Hölle, we’ll fashion our very own answer to the 14.1-mile Nordschleife here in the midriff of middle England.

Welcome to Northamptonshire, ‘rose of the shires’. Anything the Eifel mountains have got, TG’s Nordhämpschleife can equal. Not right now, though. Boxed in between HGVs, filtering into a contraflow. A film of muddy brine coats the windscreen. I’m already running low on screenwash. This never happened to Niki Lauda. 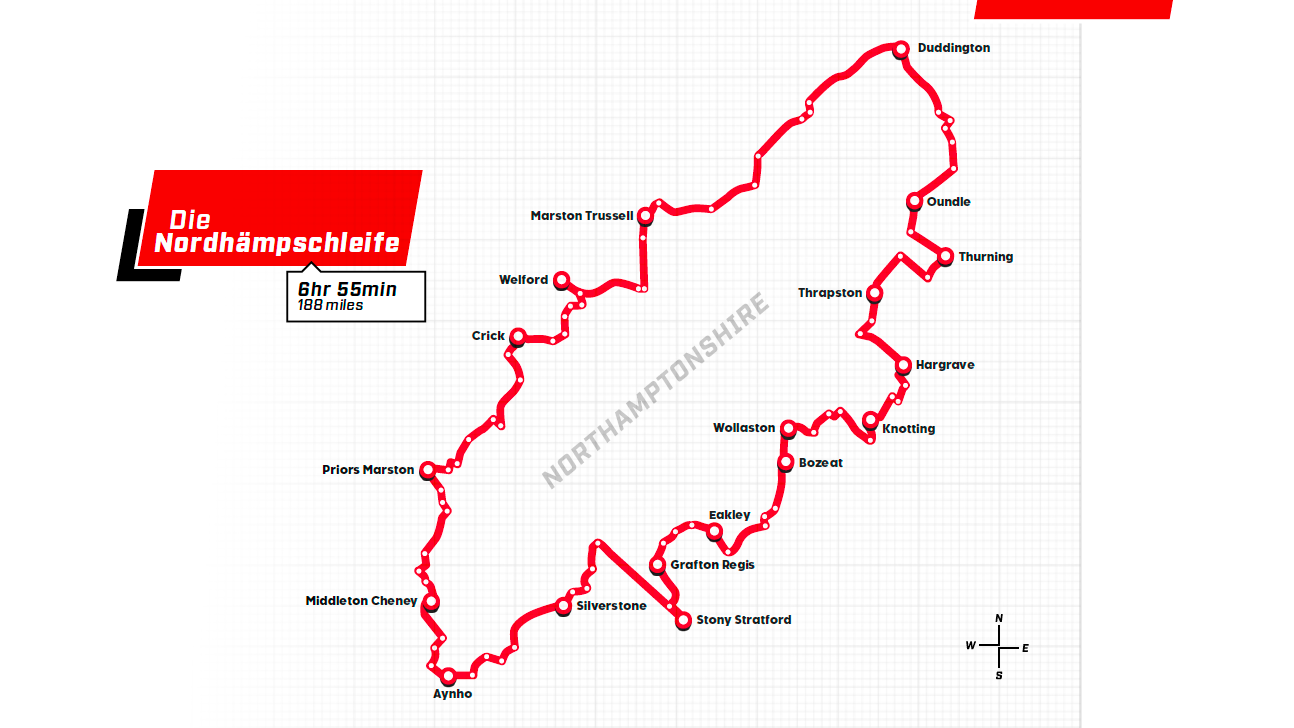 Why all this fuss over the MkVIII Golf R? Perhaps you’ve forgotten the outgoing king was a smash hit out of nowhere: the first 4×4 Golf that had more than raw horsepower in hand over the cheaper GTI. Back in 2014 the recipe book fell open at the same page: 2.0-litre turbo engine WLTM front end focused four-wheel drive under discreet bodywork for safe fun, maybe more. VW doubled the exhaust pipe count but we stopped scoffing at the OTT pipes when the combination of refreshingly supple suspension, an outstandingly planted understeer-phobic nose and a chassis that raised its game as you upped the pace resulted in the new definitive all-rounder.

The R wasn’t just a speed merchant. It had finesse and balance. Audi no longer had an excuse for a history of lacklustre S3s. AMG’s OTT A45 suddenly looked a bit silly. Forums erupted. The purists were happy. And because you could bag one for less than £300 a month, everyone wanted one too. Even pirates.

Overnight the Golf R became one of Britain’s most desirable, commonly pinched cars. I remember getting nicked on the M25 in Top Gear’s long-termer. The officer agreed I wasn’t speeding, and my lane discipline was impeccable. He simply clocked an oik in a shiny quad-piped Golf and turned on the siren.

So, this difficult eighth album is a bit of a Mick Schumacher. No pressure, but everyone’s expecting a legend. Every 300bhp hot hatch since is now automatically ‘so-and-so’s Golf R rival’. VW was able to tease the price up as the years passed, hoiking the original £29,995 RRP for a manual three-door to £37k last year, by which time only five-door DSGs were on the menu. Suddenly, this car’s huge £39k sticker doesn’t seem like such a daunting leap. I don’t even miss the now abandoned manual: seamless DSG suits the R’s character, and the majority of fans bought five-door automatics last time, some specced beyond 40 grand.

Predictably the internet’s already awash with insane PCP deals offering the MkVIII R’s all-weather, any-occasion dream for less than you drop on DisneyFlixPrimePlus. I’d set aside some change for a steering lock, GPS tracker and a slobbering doberman if you don’t trust your neighbours.

Speaking  of which: “You are now leaving Kettering, please drive safely.” Gut.

The R’s engine answers the command. It’s pretty much the same four-cylinder turbo unit you got in the last R, and in the GTI and Clubsport, and though there’s no 48V hybrid system, to allow a bit
of engine-off coasting and boost the power delivery, this was never a motor that suffered from turbo narcolepsy. You get the torque band of a diesel with max twist from 2,100–5,350rpm, where 316bhp takes over. Up a mere 10bhp from the last car, it’s paired with the same seven-speed DSG which became compulsory during the MkVII’s reign.

Yup, you’re right to question just what – besides the controversial button-ectomy inside – is new about the MkVIII R? Same chassis, same drivetrain, same power. They say it’s 0.2secs quicker from zero to 60, but VW’s claim of 4.7secs is a few tenths down on what we got out of a DSG-equipped Golf R six years ago. Imagine that: a Volkswagen undercutting the declared numbers.

Which reminds me, thanks to the wad of old rugby socks and cotton wool everyone has to stuff up the exhaust these days, the noise has lost some personality. It’s less melodic, more of a growl. The old Golf R shapeshifted from Subaru flat-four impression to wannabe Audi Quattro. This one’s humming along to the same autotune backing track as a GTI, but there’s no arguing with the punch.

Is there a car on sale that’s easier to drive fast than this? There’s torque everywhere, and the flat-chat shifts are crisper than this morning’s frost on the Karussell. Also known as the A605 roundabout, south of Oundle. Stupidly, the DSG auto-upshifts at the redline in every mode (choose from Comfort, Sport, Race and Individual), and delights in a pointless ‘fancy second gear… NOW?’ kickdown panic. If I owned one of these, the second accessory I bought after a parcel shelf-dwelling rottweiler would be a Lego brick, glued under the throttle pedal to jam the auto downchange button.

Or, you could spend £2,000 on the Show-Off Pack. Sorry, the Performance Pack. Not only does this offer the privilege of selecting your own gears with the Fisher-Price Lamborghini paddles free of interference, it introduces Drift and Special modes: the latter honed you-know-where to get the optimal lap time. This car doesn’t have it, as you and all the forumites can tell from its lower rear spoiler and 18s instead of 19-inch rims.

Could you ever show your face on veedubfanz. net/thread/bmwsucks56 with just this standard machine? I’d say you can. Underneath, the two cars are identical. You get exactly the same dampers, Performance Pack or not. Spec the £785 adaptive suspension and Special mode’s just an extra line of code in the matrix. Same goes for the torque-vectoring rear diff: all Golf Rs have the trick hardware, but it’s only permitted to deploy 100 per cent of poke to one outside rear wheel in the upgraded car.

The upshot is that even the un-Packed Golf R enjoys most of the benefits, even if this one can’t hold the ‘watch this’ powerslide leading to TikTok fame and a tedious email exchange with your insurer. Stab the throttle on the apex of the corner and you can feel the  car tense and pivot, as the torrent of power surges like a white water current to the rear axle, punching the car forward and simultaneously helping it rotate as the torque is juggled side-to-side. You actually gain momentum as it grips, instead of traction control nipping the brakes to achieve the same ends.

Meanwhile, the electronic front diff takes care of leading the car out of the corner with immense purchase. Like the latest GTI, the new R has VW’s latest microchip mothership: the VDM, or Vehicle Dynamics Manager. Sounds like the worst strategy game since Microsoft’s Supermarket Trolley Simulator, but in fact it’s a rapid-acting ghost listening to steering angle, roll rate, G-forces and where the power’s being sent at any given millisecond, doing the arithmetic and keeping each system harmonised.

That’s why there’s no torque steer, no wheelspin, and the car shrugs off ridges and crowns dextrously. It just deals with everything, while feeling keener than the last R did when you really gave it a pasting. Eventually, the old R’s weight would catch up with it, and it’d start to heave about and catch its breath. You’ll run out of nerve before the new one does. The sheer grip and sense of composure are monumentally confidence inspiring, yet it’s alive enough to your inputs not to feel as inert as, say, BMW’s latest M135i.

Or, to come over all German, the new Golf R is 56kg heavier than the old one, yet despite that and a negligible power increase, it’s 17 seconds quicker around the ’Ring than its dad. Around our 188-mile ’Ring, a solid lap’s a 6.55, but that’s six hours 55 minutes, not including a lunch stop for the worst wurst Middleton Cheney has to offer.

I must say, I think we can equal our Rhineland cousins when it comes to corner title imagination. They have Pflanzgarten (planting garden), Fuchsröhre (fox hole) and the Stefan Bellof esses, but the Nordhämpschleife encircles villages like Grafton Regis, Brackley Hatch and Priors Marston, all of which sound like they went to Eton and did terribly well, thankyouverymuch.

Should you be tempted by a staycation, this loop offers other advantages. A single lap of the world’s most famous toll road is €25 on weekdays or €30 at the weekend, with an unlimited annual pass setting your tame ’Ring enthusiast back a cool €1,900. So long as you don’t carry too much speed into the tricky hairpin at the southern tip of Aynho and spear off into the Park and Ride, our circuit comes free of charge. The Golf seesaws between 35mpg when cruising and 25 to the gallon if it’s working. Two laps’ worth, easy.

As the light fades, the sky empties another flurry before morphing from a foreboding opaque grey to dreamy watercolour pink. I tweak the R’s ambient lighting to match… 30 colours, since you ask. I’ve enjoyed today more than I expected to. The MkVIII Golf has struggled to win us over so far, unable to outrun the suspicion VW’s sacrificed budget for electric IDs and Dieselgate compensation, then phoned in a fiddly touch-sensitive interior for the sake of a headline.

This R doesn’t wallop you about the chops with its obscene brilliance, but it grows on you. I like the new brake booster giving the anchor pedal a slightly firmer footing. I’m appreciating the uncanny motorway refinement and grippier seats, even if they’re upholstered like an original Focus RS and ought to be heated as standard.

The haptic steering wheel buttons remain horrid, but at least one of them is now a shortcut to the driving mode menu, defaulting to defcon ‘R’. You’ll be pressing it often. This is still the hot hatch for all seasons, corners, drivers, and the infamous route that combines the lot into one unforgettable lap.

Apparently there’s a similar one in Germany, but why go out for Weißwurst when you’ve got roast beef at home? 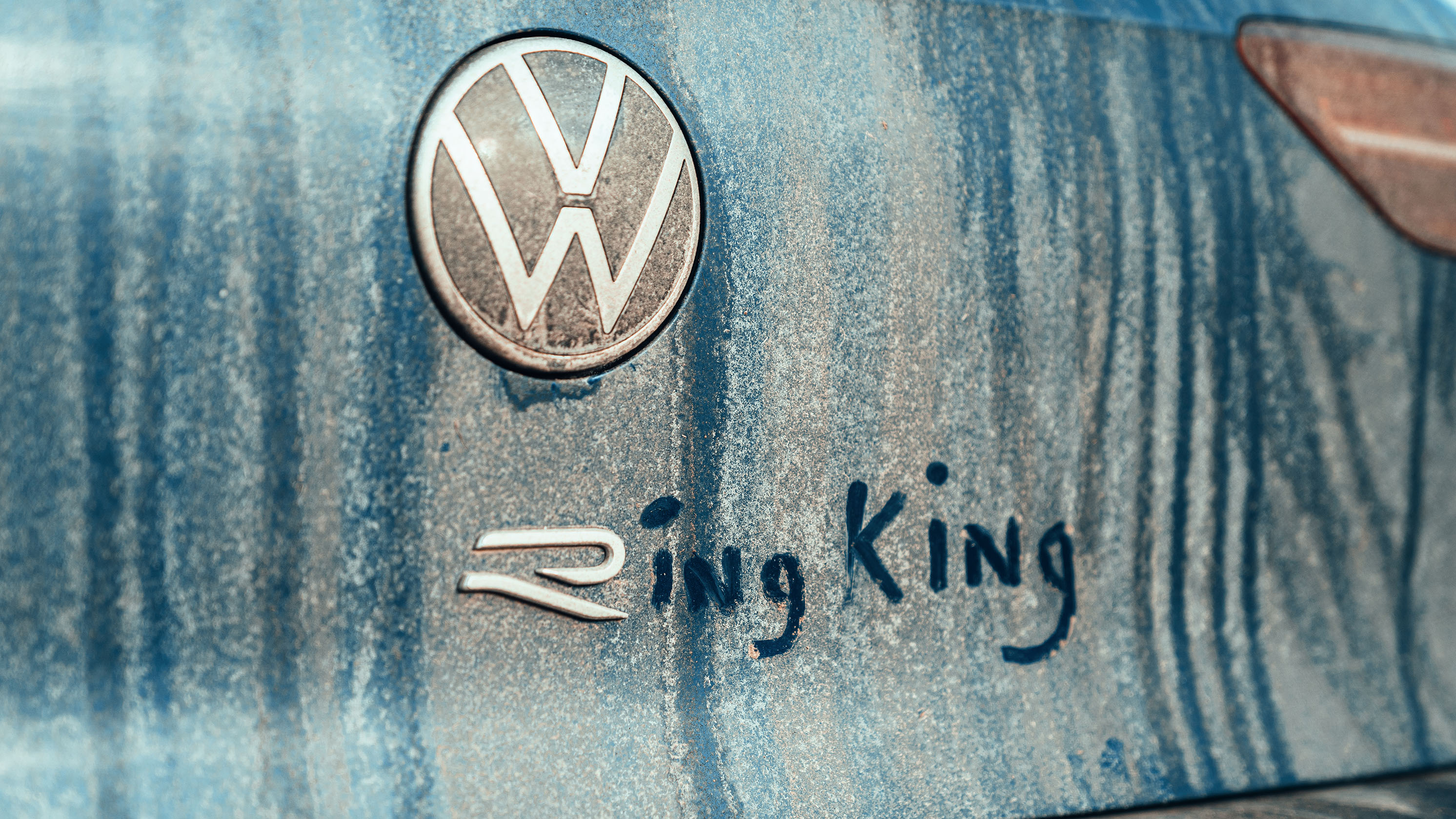